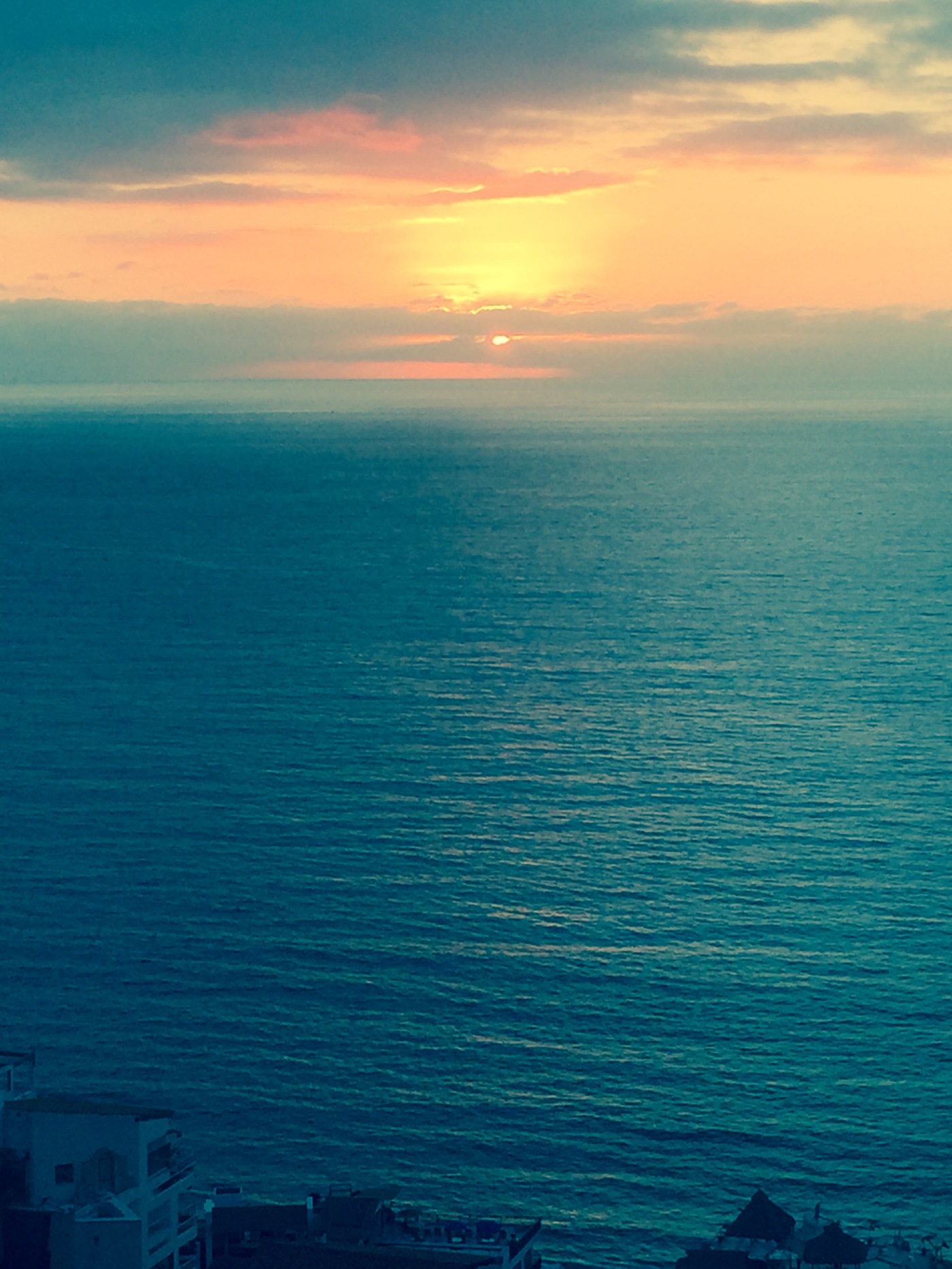 If you live in the San Francisco Bay area you live in reference to the City, San Francisco.  Yet interestingly that city is on the westernmost edge of the continent.  So everyone in the Bay area faces west until they get to the City, then they stop.  Does San Francisco face west?  Arguably it has been the portal to the Pacific.  But I wonder which way San Francisco does face?  First thought is inward, as it tries to incorporate its exterior constituencies into itself.  The city contains much Pacific Rim culture, China, Southeast Asia, Japan, Australia.  It contains Pacific Northwest.  And more of late it contains Silicon Valley.  For better or for worse.  On a recent trip through Silicon Valley to Cupertino, through Los Altos and out to Santa Cruz I noted, as always, the oak trees, open hilly spaces,  mid-century architecture.  There’s no way San Francisco contains that.  But the life of Silicon Valley, those young hipsters, they face San Francisco and San Francisco consumes them.  So who will win, the oak hillsides of Sand Hill or the restaurants and bars of the City?  The secret is the South Bay was always a staging area or a retreat from the City.  So you enjoy your horse farm and your vineyard in the hills south of San Francisco precisely because you can afford a retreat from the City.

I grew up in the East Bay.  The light industrial side of things.  There are so many people out there, UC Campus, lots of malls and community colleges.  It’s not the heavy industry of the areas immediately north and east of San Francisco, the refineries and former shipyards.  Just lots of people spreading out towards Mount Diablo, washing around it actually, a 4,000 foot mountain that will get a tiny bit of snow sometime during the winter on its deserty scrub and oaky slopes.  The dreams of those people are dreams under an oak tree in summer, ephemeral and gentle.  I see my high school classmates becoming more and more puffy and hunched over as they walk.  I suppose the best of them are like oak trees with a solid, enduring air.  Anyway, that is Walnut Creek.  I had a taste of Concord, also, with its working classes and cheese cooperatives, back in the 1970s.  Who knows what they do now in Concord.  I think it’s a back office city, so what goes on there is subsumed within the expression of multinational corporations to the world at large.  Seen in downtown Walnut Creek, where everything is actually sold.  A hub within the East Bay, a Chicago for the Bay Area.  And what of the Bay area’s Atlanta?  How will Oakland fare this time when it has taken some of the wind out of Little Chicago’s sails?  The wind blows through but as yet no large cranes catch the air and drive development forward.  Will they come this year?

In the meantime I can go to San Francisco to write, or just kick it in one of these other cities.  There’s a ferry from here to Oakland, the 3rd nicest city to live in in the US.  Or I can just have lunch here in the City and remember eating out with my family in Seattle which looks towards San Francisco past the heads of certain high tech giants.  We had a great week there and I can sit here and look back on that week in the city that looks back at San Francisco.  Yes a lot of mirrors and reflection.  And fewer beards here, less competition there.  You notice that’s two things about Seattle, not about San Francisco.  The consumer and the consumed — in a gritty reality contest you know Seattle would win.  But that’s like a contest between the brain and the stomach, the parent and the child, the theatergoer and the director.  Who is in charge?  Who writes the script and who approves it?

The Financial District is a bit unexplored for me.  I’m in a little burger bistro on a restaurant alley I didn’t know about.  It’s 1:30 and everyone suddenly left, except a few of us.  A couple of executives, a man with his sister, two men at the bar looking like they need to discuss important matters with the bartender, a big man and a woman at a high table.  The fast kids left.  Back to work.  The buildings are tallest here.  The water pretty far away.  These pedestrian alleys are cool, right in the shadow of the TransAmerica tower.  The servers seem happy.  Everything is so fast, how could anyone complain?  In the mania of it it almost feels like it doesn’t matter what all of us is doing, just that we’re doing something, and we care.  Counterpoint, my junior colleague at work chooses a pace that gives him lots of time for self-doubt and moaning and groaning.  What’s the point?  Why not drown your doubts and sorrows in enthusiasm and more work, instead?  The doubts and sorrows may go away.

What about me?  I definitely need to keep the momentum going.  And so I go in to work and scream through my calls for the day, finishing them quickly so I can shift focus to follow-ups and projects.  It’s like I’m in a whole different world from my junior colleague.  This woman calls me from Paris and says I’ve promised her an offer on her building.  I have people lined up to gather the info we need, analyze it, write the offer, schedule a follow-up call.  We will execute.  Meanwhile I hear the song Jessie’s Girl playing and celebrate Bruce’s enthusiasm but not his assumed pathos.  If you want a girl like Jessie has, you just have to go out and get her.  Probably in San Francisco, although that is one of the places in this world where you’d have to work harder than anywhere else.  Better try Chicago or maybe some weird hub city like Cincinnati?  Berlin?  Rio?  Goa?  Just don’t stay in that little suburb that Bruce is singing about, where everyone holds on to what they have as prosperity slips away.  Then you’d just have to be satisfied as Jessie’s sidekick.  What girl wants to go out with a sidekick?  Sidekick girl.  Still, that would be a more wholesome song than Jessie’s Girl, much more Marvel.

Over a thousand words.  I have a secret for you.  Wait for it.  Tainted Love plays and all but one of the guys at the bar and a big group praying in the corner leave.  One quiet male couple arrives to snack on sliders and salad…but we’re energized by the unseasonable heat and the Herculean efforts of those who have already gone back to work.  Those two guys don’t seem worried.  Seems like they could be sitting in Puerto Vallarta.  Maybe they own the restaurant.  Thank you, calm, shorts guys; if there’s anything I actually like better than Puerto Vallarta it’s idealizing Puerto Vallarta, and reliving the moments there that seem to have just the right combination of otherworldly and familiar, gay American and homophobic Mexican (or will Donald Trump and Jessie and his Girl have it the other way around?  Homophobic American and permissive, tolerant, long-suffering Mexican).  Just as an aside, Hillary Clinton actually called all of us racist in her effort to highlight the racism of Donald Trump.  Better to admit it and try to change it than to cover it up and have it come belching out under the influence of whatever makes us feel at home.  A woman stomps out of the corporate group praying to the ideals embodied by the leader, the one paying for lunch, in her high-ish heels — a commonplace late Admin exit.  You can hear someone bossily expounding over there.  Almost 2 PM.  Can she finish up in time to catch the Clinton/Trump debate t0night?  Did I mention it’s hot today.  Oh yes, but down here in the artificial valleys of the financial district there are cool breezes and U2 plays.  We shift quickly, here.  Mad rush to cool afternoon.  You find your place.  The secret is this place is not essentially different from Puerto Vallarta, or that pathetic town where Jessie’s sidekick watches his girl.  I have a feeling Puerto Vallarta and Sidekick Girl beat Jessie in his San Francisco suit every day.  The secret is Jessie dreams of escape and he’s probably always had a thing for Sidekick Girl.